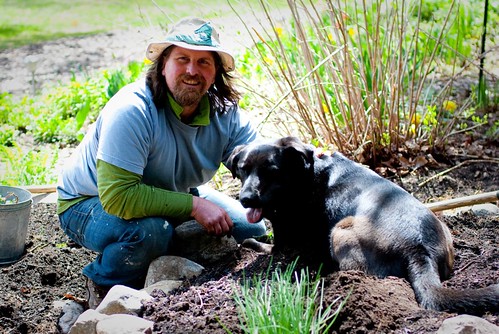 The Edge Kitchen is run very much like any home kitchen where care and attention are found at the top of the ingredients list. Of course this is the case in terms of making things from scratch, but what I want to highlight here is the way leftovers fit into the culinary equation.

In particular, this is a story of how some leftovers figured fairly prominently in the last meal of an Edge program. This is also a story of why when guests ask me for a recipe, I can’t always share any details … although I truly wish I could.

While a particular theme (say, East European) or seasonal ingredient (say, our backyard maple syrup) underlies the idea of a meal, what I actually cook is based on a combination of what’s fresh in the fridge/pantry, our guests dietary concerns and what’s leftover from previous meals served over the weekend. Todd credits me with being fairly astute at “longitudinal meal planning,” however, for most of my time cooking at the Edge this process plays out like “Oh boy … what am I going to do with all these extra peppers?”

The final meal of the last Basic Shamanism program is a prime example. When planning Sunday’s lunch a few days before the program began I was hoping to balance the globally far-flung flavors of Latino cooking with –for the most part– provincially produced goods. By the time I started cooking on Sunday morning, the dishes I had planned based on this general Latino theme were further influenced by an extra roasted chicken, two left-over accompaniments, and a bunch of Ontario green house peppers that where twice as large as expected. 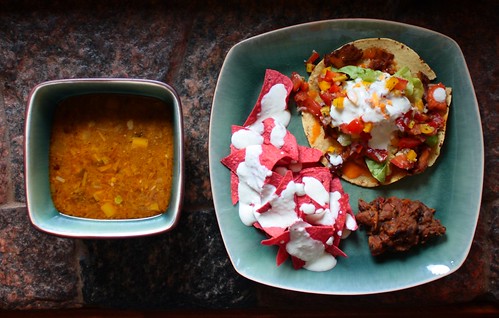 For the broth with sweet peas: I love to stuff local free-range chickens with coarsely chopped garlic, onions and leek tops (and of course fresh parsley, rosemary and sage if you where able to keep them in doors over the Winter like we were). I then rub the outside of the birds with a combo of coarse sea salt, black pepper, paprika and “salt-free spike” and put them in a hot oven (breast up) to crisp the skin, flipping them to crisp the back, and then roasting them covered so the “stuffing” steams the meat off the bones. Given the place of the roasted chicken on the weekend menu, it was not a long step to take when making soup for Sunday’s lunch. After the roasted chicken was carved and served for Saturday’s dinner I just put the carcasses (and “stuffing”) in a pot, added a few more onions, carrots, covered with water and simmered for a few hours. I discarded all the solids and added organic sweet peas (frozen) and we had simple soup to hopefully balance the stronger flavors of the quesadilla. 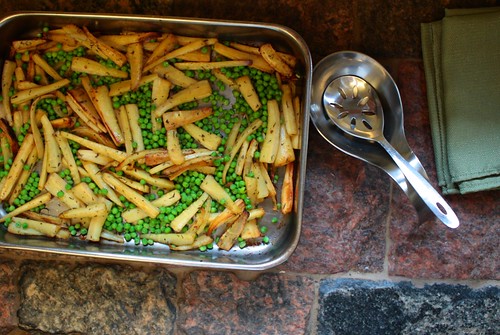 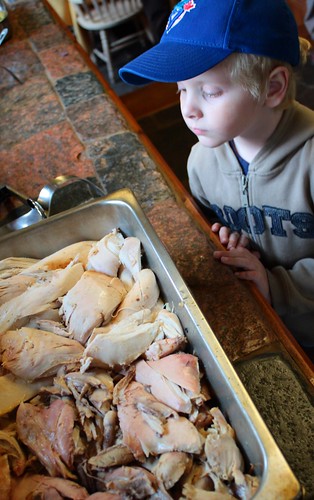 For the Quesadilla filling: Like almost all my entrees, caramelized onions form the backbone around which I add combinations of herbs and spices to build flavor. For this dish, I sautéed diced cooking onions in olive oil and sea salt until they developed a dark brown color, I then added diced leeks and garlic. Once they softened, I moved everything to the outside of the pan, added a small pat of butter and toasted cumin, paprika, dried cilantro, oregano and chili powder until a little smoke appeared. I then added the left over roasted chicken, and deglazed the pan with a can of diced tomatoes and some of the stock I was preparing for the soup. I just let everything simmer until the liquid evaporated (about an hour). 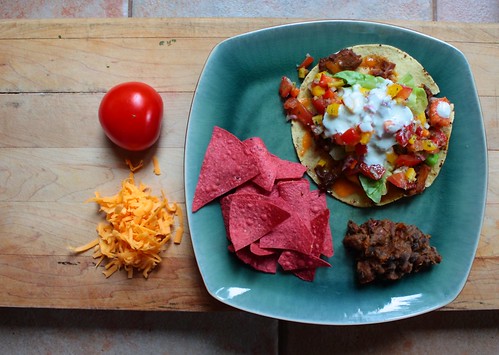 For the toppings: Matt did the food shop for the program based on a list I prepared … how was I to know that the peppers were going to be twice the size as I expected. Given that these peppers where grown in Ontario greenhouses, (and I’m in the midst of preparing our gardens) I just could not resist making a fresh salsa loaded with peppers in anticipation of what we will grow at the Edge and what is going to be available at the local market later in the summer. For the salsa, I diced fresh (greenhouse) tomatoes, mixed them with a little sea salt and put them in a colander to drain. In a large bowl, I mixed olive oil (3 parts), apple cider vinegar (1 part), a shot of maple syrup, diced garlic, dried cilantro and oregano. To this I added diced red and yellow peppers and a small red onion (finely chopped). Once the tomatoes were drained, I added them to the pepper mix (the reserved liquid went into the chicken mixture). I let this all marinate for about an hour. About twenty minutes before serving, I pressed 2 fresh lemons into the mix and added a large handful of finely diced chives (from the garden) and flat-leaf parsley (we were able to keep in containers over the winter). The final quesadilla topping was a combination of a fresh chive-garlic sour cream served on Friday night (to accompany the baked potatoes which we had with maple sap braised pork roasts) and a cucumber-yogurt-scallion salad served at the previous days lunch. Both accompaniments were blended until smooth and creamy in a food processor (it was a sunny day … high solar power).

Putting it all together…

Building the Quesadillas was just a matter of baking organic Canadian corn tortillas on a cookie sheet until just crisp, covering the tortilla with the chicken mixture, topping that with some 2 year old cheddar (made a few hours north of the Edge) and broiling until the cheese melted.  Guests where then invited to top the quesadilla with the sweet pepper salsa and the creamy cucumber-chive dressing.  It seemed to go over fairly well.

The lunch bell rang at 12:30, I decided what I was going to make about 3 hours before that, and in between I was just in the moment… I wish I could share more about how much? and for how long? I just never paused to measure, my cooking is about those 3 hours, and the 3 hours before the previous meal, and digging gardens, and dealing with generators … and that’s why I don’t have any “recipes.” 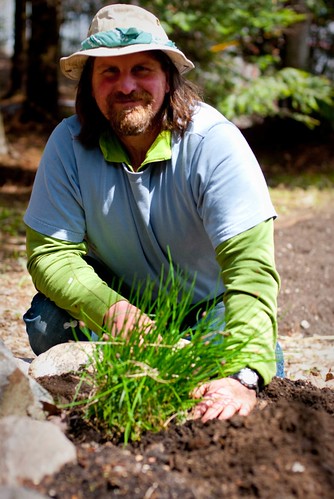