Back in Buzziness with Bees at the Edge

Published By Todd Lucier on June 16th, 2015 in Edge Insider

In the winter of 2013-14, Ontario beekeepers lost an astounding 58 per cent of the province’s honey bees — well above the 15 per cent depletion considered sustainable for the honeybee industry. In 2014-15 Northern Edge lost it’s first small crop of bees too. 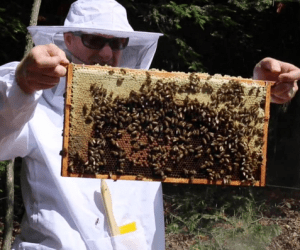 In the spring, while making maple syrup a quick peak on the bees revealed their death due to a rodent who found the warmth of the hive too much to resist.  I’m guessing cute little chipmunk was the culprit.  I had seen him skittering between the stewards’ shop and the greenhouse in late winter.

We cleaned up and painted the beehives and contacted Tibor Szabo, president of the Ontario Beekeepers’ Association who provided us with two nucs (small hives of honeybees including breeding queens). In late May, we put the bees into their new hive boxes and the bees seem to be doing very well here at Algonquin Park.

On July 1, the Ontario will become the first jurisdiction in North America to begin reducing the number of acres planted with neonicotinoid-coated corn and soybean seeds. New rules are expected to curb the acreage planted with such seeds by 80 per cent. The pesticide hinders the ability of bees to navigate, feed, or reproduce. Neonicotinoids are also blamed for making them more susceptible to illness.

In July the new rules on pesticide use in Ontario are being phased in and by 2017, all farmers wanting to use any neonicotinoid-treated seeds will have to prove they have pests.

If you want to visit the bees on your visit to our Algonquin Park home ask Martha or Todd for a tour of the bee yard.