Painting the Canvas: Exploring the life of Tom Thomson

At times, our history can seem unreachable. Today, when we see the past in photographs, the black and white images can feel unrelatable and washed out. The people seem distant & the landscapes dark, when compared to the vibrant colour we see in real life and more recent photography.  Art is one medium that can bring the past into colour.  Whether of landscapes or people, paintings can give us a vision of what the world once looked like.

Here in Canada we are so fortunate to be surrounded and live with a beautiful land. Our familiar landscapes have been captured through many excellent paintbrushes – but perhaps some of the most beloved and well captured are those painted by Tom Thomson.

Tom Thomson was born on a summer day in the year 1877. This was a peak year in Canada’s industrial revolution. Assembly lines, machines and smog began to overtake our largest cities, and the people living in them were losing their connection to the land. As a child, Tom stood out from the crowd. He was 6th out of 10 children growing up, and struggled with some medical issues, however he had an unwavering creativity brewing inside. He sketched and his parents encouraged him to improve upon his creativity.

He knew he needed a steady job, so once he was of age, he left the family home and began to work as a machinist. This was short lived, however, as he was fired for tardiness. He also tried enlisting for the Second Boar War (1899-1902) and then World War I (1914-1918), he was rejected both times due to his medical record.

He first visited Algonquin Park in 1912, it was here that he would find his inspiration and eventually dedicate all his time to painting.

At Northern Edge Algonquin, on the edge of Kawawaymog Lake, we can feel Tom’s presence every day, just by looking across the lake.  Thomson first came to Manitou and North Tea Lakes in 1913 where he met Algonquin Park ranger Tom Wattie.

Wattie and his family in South River soon adopted Tom as one of their own. He visited their cabin on Lake Kawawaymog (On the little island seen from our shore) many times, and it was during these visits that he painted, “The Tent”, “Round Lake Mud Bay” and “Chill November”. It is also speculated that “The West Wind” was painted on Kawawaymog. 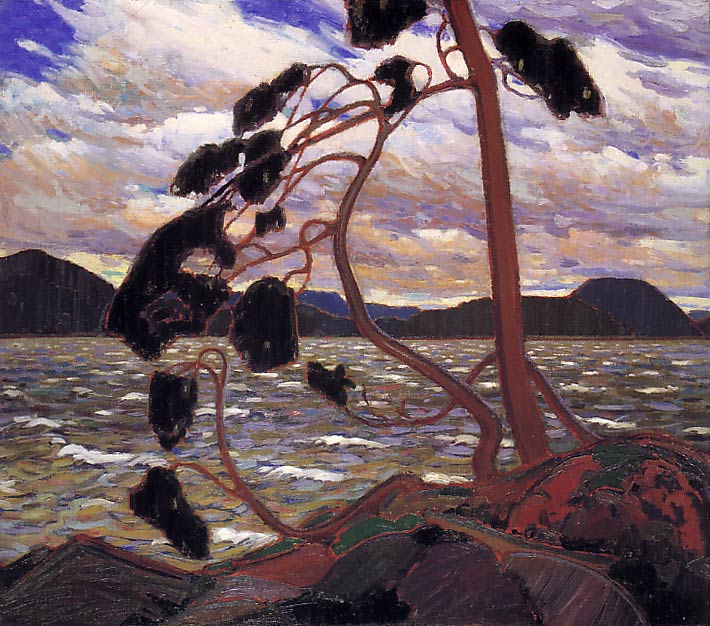 Tom’s connection to this area and it’s people is clear. Tom felt drawn to the area not only by his friend Tom but the scenery . He loved exploring and discovering via canoe what was around each bend and nook. Who knows what other beautiful things Tom might have painted if not for his early death.

The death of Tom Thomson remains full of mystery. On July 8th 1917, one-hundred years ago, Tom disappeared while canoeing on Canoe Lake in Algonquin Park. His body was found eight days later floating in the lake. The cause was deemed to be drowning, with no foul play suspected. However in later years following his death some suspicion arose. Some people believe that Tom was murdered, others suggested that he took his own life. These theories however have never been proven. 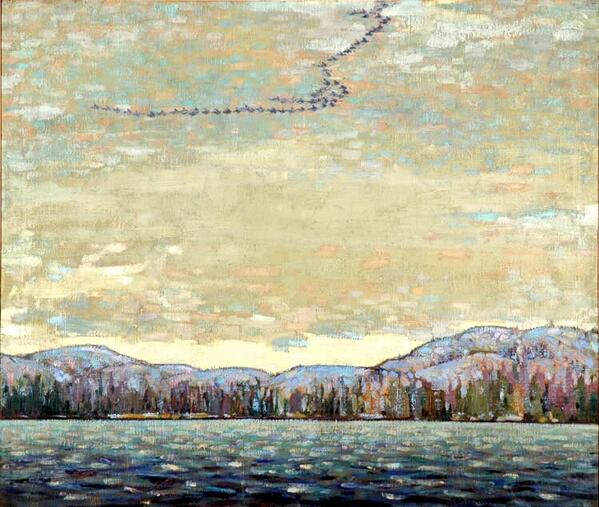 Tom’s mark on Canadian art is indisputable. He directly influenced the Group of Seven, many of whom were his friends and  went on the become renowned for their paintings of Canada’s landscape. Tom’s style reflected the Canadian landscape and moved people so much that he’s been featured in the National Gallery of Canada to this day. In South River  you can find Tom’s name on many things. South River’s “Tom Thomson Park” boasts a wonderful disc golf course, while Tom Thomson Lane marks his legacy in our small town.

July 8th, 2017 marks 100 years since Tom’s passing. Its interesting to see in 100 years we are still talking about a man who simply loved to paint. Everything in his life led to painting, Had he been physically fit to fight perhaps we would have lost him to the ugliness of war…Instead we saw him flourish and in return we nourish ourselves with the gifts he left behind.

When I think of Tom a quote comes to mind from his friend and colleague:

“Thomson sought the wilderness, never seeking to tame it, but only to draw from it, its magic of tangle and season.”

– Arthur Lisman, the Group of Seven

So to Tom’s memory we invite you to join us this summer  in seeking the wilderness, becoming inspired  and leave with more of you than when you arrived. Above all reconnect to nature and ourselves.

In commemoration of Tom’s anniversary, we will be including The Tom Thomson Experience, a program element featuring watercolour art & seeing the landscapes as Tom did, in our Up North: Algonquin Explorer programs.

Thank you Tom for your gifts.