Published By Gwenith K on December 12th, 2017 in Circle Stories From The Heart

I was doing my first fast at the Petroglyphs Provincial Park one spring many years ago. I had my lodge set up inside a cedar circle under a beautiful white pine tree. After a few days, I was disappointed that I had not been visited by a bear or deer or had any amazing spiritual experiences. I must admit I was feeling sorry for myself. I got a bit weepy and was feeling miserable.

As I sat there, I suddenly began to hear a song. I thought it must be one of the other fasters but they were far away and this song sounded very close. 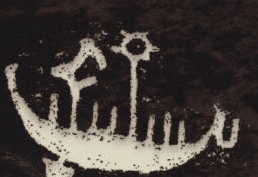 I got up and walked around inside my circle and the song seemed to be getting closer. I looked down and saw a white marble stone on the ground. Crouching down, I discovered the song was coming from the stone. I began to sing along with it, slowly feeling better. Soon, I was singing the song with gusto and my heart was overflowing with happiness and gratitude.

Later in ceremony, when those who fasted were being welcomed back from the Spirit World, I shared that song with everyone. It wasn’t until many years later, when the Kogi Mamus from Colombia were coming to Canada, that I discovered the true power of this song.

We were planning to do a special ceremony at the Petroglyphs with the Kogis. In the spring before their visit, I was visited in dream time by one of the Kogis. He asked me to begin waking the rocks up. I didn’t know what he meant. I kept thinking about this for weeks, asking the Kogis how to wake the rocks up.

One day, I was sitting in my office at Ogemawahj Tribal Council and a Kogi Mamu was suddenly sitting in front of me. He looked at me and said “Wake the rocks up! Sing to them!” I finally understood that this beautiful honour song for the rocks also had the power to awaken them.