Published By Gwenith Kikkawa on November 21st, 2018 in Circle Stories From The Heart 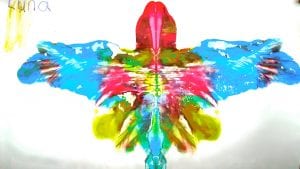 ‘Thunderbird’ by my daughter, Luna, when she was 3-years-old.

I am a dragon, flying through the air. But I am not alone. I am not safe. Another dragon is chasing me with intentions to hurt me. I can feel the heat of this dragon’s anger, like fire breathing on the tip of my tail. I am flying as fast as I can to get away, but my fastest is not fast enough, the distance between is disappearing.

I hear a whisper as though it is in the winds, “Be the light” it says. I see a ray of sunlight and fly towards it, as though I am flying into it, merging with the light. In that instant I feel myself merge with the light as equally with the air, the water and the earth. I become the light because of the uniting of these elements. I am at their unity point, like at the center of the medicine wheel.

And just like that, I vanish into thin air. But I am not invisible. I am simply in a raised frequency in which this angry dragon cannot see me. This dragon becomes puzzled, allowing for more space to grow between us, helping me get to safety.

But then I start to think about being the light and marvel over what I have just experienced, Aha! As soon as I do, I am visible once again to the dragon chasing me, and the chase pursues. This cycle repeats itself over another handful of times.   Each time that I let go of thinking and believe myself into be-living the light, I vanish, creating more and more gradual distance between me and the other dragon.

I will always remember this nighttime dream I was gifted in November 2011. To this day, this remains the most lucid dream I have experienced in my lifetime. I didn’t realize it at the time, but this dream was both illuminating and initiating the path I was walking, guiding me to be the light more and more with every step. And just like the dream, it has been a cycle of moving in and out of thinking, believing, and be-living, all while learning how to maneuver safely through encounters with shadow dragons within and without.

In September, 2014, I attended a CCSS Collective Thunderbird Gathering. I recall so clearly the final ceremonial piece of this gathering. We prepared to put our prayers of healing into 22 goose feathers, to be hung on the wooden-bone structure of a Thunderbird.  I was the first to voice aloud my prayer offering of “releasing hurt”. But before I was able to place my feather on to the bone structure, thankfully, the Thunderbird spirit spoke through one of our circle members, Jan Beaver, the builder and caretaker of this creature. Thunderbird spirit invited me and everyone to rise through the focus of the wound potential, into the light potential; for, what we focus on feeds its growth.

Internally, I started to have a tantrum, feeling myself become a little child. I heard a voice inside my head exclaiming, “How dare you! Releasing hurt is my story, it is me. This is my truth. How dare you. What right do you have to dismiss me and tell me this is not my truth? It took me so long to even acknowledge this, to be able to have to courage to voice this. How dare you. If I am not releasing my hurt then who am I? Who am I without my wounds to release? I don’t understand!”

I felt the wings of a Mother Thunderbird envelop me, holding me safely, allowing me to tantrum, to yell, to cry, to whail within. When the fire of my inner tantrum began to dissipate, just a little, I was able to hear Mother Thunderbird whispering, asking me questions me to go deeper.

Mother Thunderbird: “How is ‘releasing hurt’ affecting your experience now?”

Inner child: “It’s confusing me! I don’t understanding what you mean! I’m mad!”

Mother Thunderbird: “What do you need?”

Inner child: “I need to be acknowledged! I need love!”

Mother Thunderbird: “What does this love taste and smell like?”

The true prayer I was being guided to offer in the goose feather, to hang on the bones of the Thunderbird, was not hurt, but ‘Love’. Like a turned stone, I came to a new perspective of my prayer.

Focussing on ‘releasing hurt’ nourished division, only allowing me to see part of the whole truth.

Focussing on the light of what my hurt needed, nourished unity, allowing me to see the whole truth.

Upon this realization my inner child began to smile and feel uplifted with purpose of her new found role. She became like a detective, curious in her most pure nature, befriending my hurts and wounds, much like an innocent girl making friends with a Frankenstein. Her newfound role was to get to the root of these hurts, and find out what their heart and soul needed.

Through her living purpose she has taught me that within every wound or shadow is a question; within every question there is a need being acknowledged and identified; and within every need therein lies my gifts and ability to answer and fulfill them in their light potential.

I was not dismissing or abandoning my hurt or wounds at all. My inner tantrum was a reaction to my refusal to feed my hurt and wounds anymore. Beyond the tantrum, was a place of stillness, where I could listen deeply to my wounds, hearing and acknowledging their feelings, asking them to express their needs, and inviting them to be a part of co-creating our healing. In that moment, I committed to seeing the light in the deepest, and darkest of all wounds. I re-committed to being the light.

In October, 2015, I attended our CCSS Collective Dragonlines gathering. Preparing to gather, I received another gift of light through a shamanic journey:

I am a dragon, flying with the ancestral dragons in a large flock, following the golden umbilical cord lines in the earth, leading us to Mother Earth’s placenta. Her placenta is the gathering space where all life is incubated and nourished, and where all waste products from the past are transmuted.

We land, standing on the edges of the placenta. We open our mouths to drop golden jewels and sparkling gems of our ancestors we have been gathering and carrying. Some are brooches, rings, necklaces, watches, figurines, and other valuables passed on from the ancestors. We drop these jewels and gems of value into the placenta, which then starts to swirl and fill the placenta with golden liquid.

The golden placenta offers a safe landing pad for their fires. In the golden placenta, their fires extinguish safely, transmuting their fires into more golden liquid. The liquid of golden value flows strongly out through all the veins of the earth to continue to nourish all of Mother Earth’s children in the far reaches of her vast body. We rejoice, howling as dragons!

As I have been gathering the jewels and gems of light and value within me and my ancestry, the natural result or effect has been the transmutation and dissolving of the flaming dragon skulls within me and my ancestry. Once again, the dragons were exemplifying for me how bringing focus to my light potential creates the greatest alchemy of all – healing more wounds than I could imagine in my limited mindset. Focussing on the light of the microcosm activates an expansive healing through the macrocosm in a miraculous instant.

If my journey had begun focussing on the flaming dragon skull wounds, this would have been a very different journey of re-living my ancestral hurts and wounds; starting my healing journey from a place of lack and scarcity. And so I practice ‘flipping dragon skulls’ – focussing and re-focussing on the value of receiving light first and foremost. This allows me to transmute the wound of scarcity, sending golden liquid of value through all of its roots.

I offer my thanks and reverence for the Dragons and Thunderbirds who are powerful spirit helpers of the times we are living in, encouraging us to thrive. In times of great change and challenge, they invite us to seek refuge and safety in becoming the light. Amidst the stirrings of transmutation, as we feel intensely, they invite us to go deeper, and deeper…and deeper still, until the full light of truth rises like the sun. When we feel an overwhelm through our growing awareness and awakening, they remind us to flip the dragon skulls and re-focus on receiving the light, for as we do, we transmute the greatest needs we see (and don’t see).

Yours truthly, in love and light,

Physicists and scientists say that humans are made of cosmic dust. They explain that the same stars created billions of years ago, also make up the basic building blocks of the human body through elements of carbon, hydrogen, nitrogen, oxygen phosphorous and sulfur.

What thoughts, words, tools, practices, dreams, songs, people, or environments, reflect the starlight within you?

In a challenging moment, what would it be like to shine some inner starlight there?