Published By Doug Mannen, Circle Member on March 7th, 2019 in Circle Stories From The Heart

Honored I was to caretake Grandmother World Drum for two sessions, Nov. 10 to 16 and Nov. 19 to 23, 2018. For the first two days She partied with the other drums that are here in my home, as there was a wonderful re-uniting (they had met before four years ago ). There was much singing and talking in the drum room well into that first night.

During the time She was with me She spent Her time at Alliance French Immersion Public School in North Bay. She visited all the classrooms in the school which was a feat in itself because Alliance is a school of over 600 students from JK to Grade Six. Including their teachers, ECEs and other adults She was seen, heard, touched, drummed softly and loved as over 670 people acknowledged Her story. Much fascination there was indeed. The most hugs and genuine love was displayed by the JKs; they do love their Grandmothers and once they understood that is who She is, there were many hugs, some kisses and so much gentleness as She was passed from child to child, resting briefly on their laps.

Every class sat in Circle as her story was told; there were more teachings concerning that, so, not only was Her story told but connections were made to The Seven Grandfather Teachings. The older students showed the most understanding and asked very important questions concerning Her travels. They were the most involved when they were able study Her record of travel. Many called the leather circles a map; one young girl who has traveled more, said the leather records looked like a passport.

I can say with confidence that prior to every classroom I visited the teacher would apologize for or warn me of children who could present negative behavior. The reality is that it’s true; these children do exist. When I hear these warnings I just set them aside for I have witnessed the Wonder of The World Drum and Her capabilities. This is a story of one such Wonder!

I was to visit a class one morning. The customary warnings had been voiced, but there was more. A boy in the class had been documented as being defiant and would frequently display opposition to authority; his angry outbursts were having a pronounced effect on the class and the teacher. There was a suggestion that he could be removed from class for the presentation, one which did not occur.

The students were sitting on their chairs and in a circle. He had been seated directly across from me. He sat with arms folded across his chest, a frown upon his face and slouched in his chair. No doubt his teacher had warned him with consequences. There was an air of apprehension in the classroom, the other students wondering what would happen.

As I was introduced and started my presentation of The World Drum, the boy straightened in his chair ever so slightly and lowered his arms. This brought a worried glance from the teacher. I caught her eye and gave her my best ‘just let it flow’ look. A chair had been left empty on my left so The Drum could rest there, but at that moment She was in my arms. The boy looked at that chair and stood. Another ‘let it flow’ glance. As I proceeded he quietly passed behind his classmates, making his way to the empty chair. The students were concerned, but they had seen my silent message to their teacher too; all kept paying attention to The Drums’ origin story and her travels. I paused and offered the chair to the boy who seemed to breath for the first time in minutes. He sat.

For the next part of the presentation I would discuss Her message in detail, before I passed her on to the class to experience Her firsthand. But first I asked the boy seated beside me if he would respectfully hold The World Drum on his lap and be part of the presentation. He started asking questions, not even waiting for a response. I asked him to stop and sit quietly. There had been the  opportunity for him to display his tendencies; he had not taken it.

The rest of the time spent went wonderful; the apprehension which had been present originally was gone.

As I concluded the presentation back in our circle the soon teen to be stood and admitted,’ I have anger issues! But not when I held The Drum.’ When I asked what he might try to stop his angry feelings the next time his response was ‘ I could think about The World Drum and maybe my Grandmother.’

In all, that experience has been one of the most profound. But then, there has been many of them.

Whenever I presented or helped to present there was a profound sense of curiosity, wonder and eventually understanding of what Her purpose is.

I found that Her vibrations raised the school’s vibrations immensely; everyone had a common experience to share with each other, even when the teachers were in the staffroom for lunch. Instead of the constant need for speed, responsibility, accountability and so on which creates great stress, the classrooms became an environment of knowledge not dedicated to the curriculum. The World Drum’s message is certainly desirable for each classroom, but having The Drum there and each child and adult holding and playing Her is a concrete learning tool which helps to enhance the potential of understanding. So many children connected to The Seven Grandfather Teachings, which are commonly displayed and used as guidelines to behavior in many schools.

And The Drum seems to feed off the raised levels of vibration as She becomes even more Wonderful! That is demonstrated in each following presentation.

As far as community effects go, they are more illusive to pin down, but I do know that far more numbers of people, other than the children, become aware of Her story as parents (many split families), grandparents, kinfolk and friends hear the children’s stories of their experiences. Each school also has a network of communication techniques, from classroom emails to school newsletters home, which enhance the experience even more. But, the key is the oral stories which are told by the children to those who listen. How wonderful in our age of electronic communication!

It was wonderful to visit with each class, over an hour at times, and know that students were using their devices to research distant cultures and lands. The experience turned into a huge Social Studies teaching.

All teachers wrote blurbs, took pictures and sent them to the parents of the children. Links were shared for personal at home research as well. Some of them were shown in classrooms, especially the older ones. Most children completed their “homework” which was to tell as many people in their families as they could about their experience and express feelings. The actual number of people affected by The World Drum’s visit to Alliance numbers over 2000!

The Vice Principal took pictures, wrote a newsletter and sent it to all the families connected to Alliance. Fitting it was to have The Drum there because it is a French Immersion School which was created as a joining of other schools. The name Alliance is not pronounced like the English version but it has the same meaning and represents in an important way what The World Drum’s message is.

On a more personal level my heart was lifted over and over again by the reactions of the children; many tears I had at times. As well She came to me at a time when I could benefit from Her and all the experiences which ensued. She uplifted my Spirit and gave me a renewed purpose following a difficult two years plus in my personal life. BUT THE CHILDREN! They are so very important and they understand that The World Drum’s message comes to them at a time in their lives which gives them so much time to make a difference in a difficult and complex world.

My experience, especially with a school called Alliance in North Bay, has shown me how easily We can come together when the opportunity is presented, if We are listening! Alliance, whether said in French or English has the same meaning… uniting for a common goal. The World Drum speaks!

It was indeed a privilege to present Her and to tell Her story to so many. 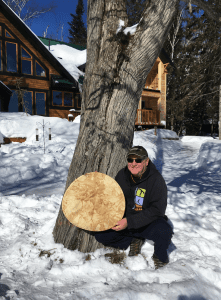 Doug plays Grandmother World Drum, inviting the winter wind spirits to blow Her song of unity across the earth. Doug is standing on Kawawaymog Lake, at the center of a star-ice-lantern medicine wheel created by the Anishnabek Nation Family Cultural Retreat.

Find a quiet place where you can connect to your heart, and listen deeply within.

Allow your senses to reconnect you to a time when you experienced a difficult situation, perhaps when you had been troubled for some time.

Is there a journal entry, a poem, a song or a piece of artwork waiting to be expressed which connects to your experience?

Thank you for sharing the magical experience of hosting Grandmother Workd Drum!

Thank you for sharing the loving story of Grndmother World Drum. How Her energy touches the heart and soul of our children and all those in Her presence is powerful.

Thank you for sharing your story. How very blessed the children and everyone in the school are to have had you so lovingly share Grandmother drum with them.