Published By Deanna Fry on October 25th, 2019 in Circle Stories From The Heart 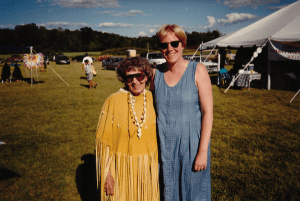 I have loved trees and being in the forest for as long as I know.  They are part of my earliest and most poignant family memories. I remember walking beside my little brother’s stroller, with our mother, to Wexford Forest at the end of our street in Scarborough.  The wonderful scents, cool shade, and welcoming presence of my tall tree relatives as I collected their gifts of leaves, acorns and feathers to take and treasure back at home. Some things have changed since then, others haven’t.  I’m much older, my brother is no longer in his stroller, my mother is gone, and now I visit different tree relatives in forests all over. I still wonder at their incredible scents, cool shade, dappled sunlight, whispering streams, and the beautiful gifts I gather to treasure, and to offer in Ceremony, back at home.

I am a first generation Canadian of Germanic ancestry and know that the forest is in my blood.  My uncle was a Forester, as was his uncle, and likely his before that. I can remember my grandfather taking my young cousins and I on a long walk through a field to the forest at the cottage.  There he led us to an ancient, old growth white pine tree whose trunk was so big we couldn’t reach all the way around holding hands. He invited us to lie down on the soft, fragrant fallen pine needles, and told us how the First People of this land had slept here.  This journey and his stories awoke something deep inside me that has been guiding me ever since.

I experience my spirituality most profoundly through direct revelation in Nature, something I call Elemental Connections.  I have learned that the Spirit of the Land also speaks to me through the voices of its Original People, and I’ve spent decades getting to know firsthand the teachings and traditions of the Anishinaabe and Haudenosaunee First Nations in southern Ontario.  This is the story of my Cedar family, which starts in the early 1990’s with the five-day Aboriginal Awareness Course I took at Alderville First Nation, on the south shore of Rice Lake in Ontario.

Her name was Marjorie Ursula Emma Beaver, and she asked me to call her Marge.  We had met during an afternoon Sharing Circle at the Alderville Community Centre.  Our group had been invited back to a Drum Social being held in our honour that evening, and Marge had answered my question about whether we would be able to dance too – with the reply that we would, if we had brought our skirts.  I was devastated, I hadn’t packed a skirt, or even a dress. She smiled and told me not to worry, then showed me to the dressing room later that evening, where she had brought three different skirts for me to try on. I chose one and danced for the first time in the Circle around the Big Drum.  It was magical and we became Kindred Spirits.

When I attended the first Full Moon Ceremony she invited me to at her home, I learned of Marge’s other name, Cedar Woman – her Spirit Name.  After each woman offered her Tobacco Tie to the Sacred Fire during our Ceremony, Cedar Woman would immediately place a fresh piece of Cedar on the fire.  It would crackle and pop, like an exclamation mark, signalling the end of that woman’s turn. I went back again and again, learned so much and am so grateful.  I got to know some of Marge’s family, her talented son Rick, and her beautiful daughter Jan.

Eventually, it became Jan’s turn to offer Full Moon Ceremony at her home.  I was invited and we became friends. I went back again and again, learned so much and am so grateful.  Jan and I worked together many times over the years when Aboriginal Education was first formally introduced through the Ministry of Education in Ontario.  She taught me ‘The Cedar Tree’ song, from the Lummi Nation, which we have probably both shared with hundreds of adults, and thousands of children by now. My understanding of the Medicine Wheel Teachings continued to grow and deepen, as did my relationship with it’s Four Sacred Plants, especially with Cedar.

I learned that early European explorers would not have survived their first winter on this continent if Indigenous people had not taught them how to make and drink Cedar tea, which healed their scurvy.  The home I bought early in the new millennium had cedar shrubs all around the backyard, and a beautiful mature cedar with four trunks by the corner of the house. I began to care for them all, and to make Cedar tea for myself and others when we gathered to learn, or to share in Ceremony.  I also began to hear from Jan about her amazing Shamanic experiences with Martha Lucier and others at Northern Edge Algonquin, a place I had visited in 1999 to go on a Soul Teacher Canoe Journey with Martha’s husband Todd. For several years I was intrigued, feeling a pull to go and take part, but I didn’t think I had any ‘Shamanic’ capacity.

Then, in January 2016, Jan’s mom, Cedar Woman, Marjorie Ursula Emma Beaver passed into the Spirit World.  I attended her Celebration of Life, where everyone was invited to share a personal story about her. It was such an incredible way to honour, and to learn even more about, an extraordinary woman, matriarch and community Elder whose life had touched so many!

A few weeks later I travelled to Lake Atitlan, Guatemala for a yoga retreat with friends.  It was the first full moon since Marge’s passing, and Jan was holding a Full Moon Ceremony in her mother’s honour in Alderville.  I guided a Full Moon Ceremony in honour of Cedar Woman in Guatemala. One of the friends in our group had just lost her 30-year-old son to cancer a short time before our trip.  She had found a special tree down by the lake just before we were to begin and had felt called by her son to gather some of its scale-like leaves to bring along. We were told that it was Cypress.  Traditions from the North and South mingled as we used both the Eastern White Cedar I had brought, and its local cousin, Cypress. We offered a heart-opening cacao infusion instead of strawberries, and for the first time, men were included in our Full Moon Ceremonies, both in Alderville and in Guatemala.  I didn’t learn until I got back home that Cypress is known for its ability to guide the recently departed on their way, and to ease the pain of those left behind. Incredible!

These, and some of the other experiences I had in Guatemala, gave me reason to finally attend my first Heart Foundation weekend at The Edge in August 2016.  And that is when I connected so deeply and fell in love with our incredible Grandmother Cedar Tree. I went back to The Edge, and to Her, again and again, learned so much and am so grateful!

After meeting Grandmother Cedar that summer, I began to hear a whisper in the back of my mind that kept saying, “Blue Cedar Woman”.  The voice got louder, and began to speak to me in German, “Blau Cedar Frau”. When I returned for the Heart Growth weekend in October 2016 and consulted Grandmother Cedar, she suggested that this might be my name that I was hearing.  I spoke to Jan, who was there that weekend as well, asking permission to use part of her mother’s Spirit Name in claiming my own. She chuckled and said, “Why are you asking me? My mother has been trying to talk to you for a long time!”  I was blown away and sought the privacy of the sauna to process what was happening. There in that beautiful cedar building I spoke with Cedar Woman and found my other Cedar Grandmother – the Western Red Cedar that is pictured and written about on the wall.  I claimed my new Spirit Name then and there, sharing it with others for the first time in our final ceremony. I was now Blue Cedar Woman.

Since then I have continued to have meaningful experiences with members of my Cedar family.  We speak to one another in German, and I know that I am connected to my Ancestors through these magnificent trees.  I sleep each night embraced by my four-trunked Aunt Cedar, who lives on the other side of the wall at the corner of my house.  I encounter my grandmothers and great aunts when I travel beneath the ground, through and among her roots to the dark, moist, nourishing home that is the love of my family.  The Grandmother Cedar song, by Circle Member, Michelle Girouard, has accompanied me every day since I first heard it. It’s in my being now.

The Cedar trees I connected with in preparing to attend this past Heart Growth 2019 weekend told me that I was strong.  That they were with me, that I had been one of them, and that we would continue living and loving together. When I arrived at the Edge, and went to visit with Grandmother Cedar, she told me that she was almost gone, that this is a stage of life too, and that she would live on in our hearts and through the stories we tell about her.  I know now that I AM a tree-person, the trees are my Totem, and I am a member of the Cedar family or clan.

Just as we sit with our human grandmothers when they are passing, may we sit with our beloved Grandmother Cedar.  May we hold her hand and sing to her to express the love and gratitude in our hearts, to bring her comfort, ease and peace.  And as we did when celebrating the life of Cedar Woman, in January 2016, may we share our personal stories of Grandmother Cedar, another extraordinary matriarch and community Elder, so that she may live on in the Circle of Life and in our hearts as Way of the Circle family members.  May it be so, All Our Relations! 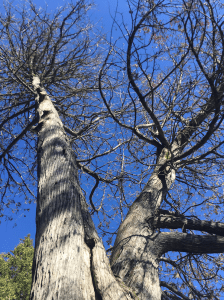 What would it be like to open your senses and imagination, rooting deep down to spend some time sitting with Grandmother Cedar Tree now?

How would it look, sound, smell, taste and feel to hold her hand and sing to her of your love and gratitude?

Which story/stories arise, and which will you tell so that she lives on in all our hearts?

LISTEN THE CEDAR TREE SONG from the Lummi Nation, sung by Deanna Fry

Wonderful reminder of our connection to nature and those we surround ourselves. Thankyou for sharing

What a beautifully articulated expression of time and space. Having been someone who has been witness to your growth and process, it is amazing to be here now. In this place, holding these stories and shared memories, ancestral calls to unleash the wild nature inside ourselves and dance to the songs of our souls. Thank you for following these callings and allowing yourself to be heard. Love you Blue Cedar Woman !~