Healing Shame through the Power of the Heart Song 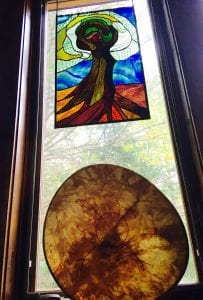 The heart is the first sound and vibration we hear when our human bodies are formed, and it is where the Song of Creation lives and is expressed through us. Living in a world of conflict and instability, we may feel lost at times in our vulnerability and uncertainty, feeling as though our foundation is crumbling beneath us. During these moments, what would it be like to remember that all of life was created from the sound and vibration that began in the heart, and that we carry this true foundation of our being within us?

This is what happened to me, when Grandmother World Drum returned, four years after Her last visit and stay at the Edge.

The World Drum Project was initiated in 2006 after Kyrre Gram Franck, from Norway, received a vision about a drum that was to travel from hand to hand, land to land, and heart to heart, around the world with a message of peace.  The Drum was created in Sami traditional style (indigenous people of Norway). It’s hyde and tendons are made of reindeer, and it’s wooden frame is made from the beech tree; all sacred to the Sami people. The symbol on the hyde is an old Sami symbol for the “Beaivva”; the sun.

Grandmother World Drum belongs to all human hearts, and has been travelling around the world for the last 12 years. With each heart-beat of the drum, the song of Mother Earth grows stronger, calling humankind to return to their hearts, respecting Mother Earth and all our relations while restoring peace on the planet.  She carries a message of hope, inspiring us to Unite and Heal.

In the autumn of 2014 I wrote the story ‘Medicine Drum of Many Colours’, about my experience with the World Drum during Her last visit to our community:

I sit down with the World Drum at the centre of the circle, with my drum in hand.  I expose my drum’s wound that has been growing gradually over the last year, growing bigger and more severe, like the wound of the Mother I am healing.  I place my hand on the frame where it is buckled like my Hungarian Grandmother’s arthritic knuckles, twisted and stretched beyond recognition. The drum is made of moose hide stained with walnut dye and the frame is cherry wood, a significant tree of my ancestors from Hungary.

As I place my hand on the tear I begin to caress the drum.  The tear for me symbolizing suffering and hurt between nations, brothers and sisters, mothers and daughters, fathers and sons, communities, and families.   Prayers for healing separation, flow through the palm of my hand as words from my heart rise to the surface like a healing balm, re-connecting mind and heart, body, and spirit, awakening our deep soul connection to the Great Mother.

I feel my drum opening to receive the medicine, while healing vibrations extend out into the room. My 6-year-old granddaughter, witnessing the vulnerability of her Grandmother, without hesitation in the midst of a group of people she does not know, responds by entering the circle and sitting next to me.  She gently places her hand on my drum next to mine, joining me in the prayer that flows through my heart.

Each time Grandmother World Drum’s arrives, it signals a time of deep listening, healing, and need to call in the light.  What I didn’t know at that time was that Grandmother World Drum was helping me to prepare for the death of my own Mother while healing the Mother Wound of Separation within me.

My Mother’s death in the autumn of 2016 triggered a state of deep grief, as I faced my own mortality. Just like the ancient Sumerian poem Inanna’s Descent to the Underworld, my life was being dismembered, physically, emotionally, spiritually and mentally. I was experiencing the dark night of the soul, undergoing an initiation, and rite of passage into my next stage of life.  I fell into a deep depression, with a lack of enthusiasm for life, losing my sense of purpose, connection and hope.

In the spring of 2018, after a brief visit by the World Drum, I wrote a story called ‘The Golden Thread: Heart of Alchemy’.  In the story I share how I had made a promise to my mother on her deathbed, that I would always remember she is in my heart and in life all around me.  When Grandmother World Drum arrived, I had been struggling with keeping that promise. Arriving with Her, was Her brilliant light, reflecting the light within me, and the discovery of the true gift my Mother gave me, a deeper understanding of my purpose and value in this world ‘to transform the limiting belief of separation, restoring connection to self, Spirit and Mother Earth’.

When Grandmother World Drum arrived again in autumn of 2018, I was surprised to find a few new markings and dents on her skin.  Her voice sounded flat and her energy felt depleted, mirroring my own state. She needed rest and nourishment. As I tuned in to Her needs, I was also tuning into mine.  When I feasted me, I feasted Her. When I prepared a Cedar Bath for myself, She too received a bath. The more I played Her song, the stronger both of our voices became restoring our vitality and strength.

As host and caretaker of Grandmother World Drum, my role is to listen deeply to Her needs and where She may be called to be of service.  A few opportunities began to present themselves as possibilities to share Her medicine. When contacting organizers of various events, pre-set agenda’s became closed doors to Her.  Through deep listening and stillness, I heard the message that She wanted to be where she was fully valued, appreciated and respected in reciprocity, mirroring the same need that I too carried.  Grandmother World Drum teaches the pathway of the heart, reminding us to slow down, trust, and receive the wisdom of Spirit that guides us to where our true gifts and purpose are nurtured.

I learned that the Parliament of World Religions was going to be held in Toronto, Ontario.  The theme was ‘The Promise of Inclusion, the Power of Love: Pursuing Global Understanding, Reconciliation, and Change’. This event seemed in alignment with Grandmother World Drum’s purpose, connecting hearts from around the world in unity, with the great need for reconciliation and healing of the Indigenous People of Canada. I wondered how Grandmother World Drum could attend the Parliament.

Initial attempts at contacting the organizers proved unsuccessful, as the overall program had been set for many months.  Trusting there would be a heart opening for the Drum, in the midst of making the decision to attend the conference, a friend and peer Leontine Hartzell from my Shamanic training contacted me, asking if I was attending the Parliament.  Leontine was offering a ceremonial dance at the Parliament entitled Weaving Divine Light for a Better Earth: A Wyana Light Ceremony.  She was honoured to welcome the World Drum and myself to participate in the ceremonial dance.

After arriving at the conference, I discovered that ‘Kahontakwas’ Diane Longboat, Co-Chair of the Indigenous Peoples Program at the Parliament of the World’s Religions, had arranged for Grandmother World Drum to be presented at the Sacred Fire in Olympic Park, everyday at noon.  Firekeepers kept the sacred fire burning throughout the seven day conference, creating space for connection and prayer.

It is always a gift to share Grandmother World Drum.  At the sacred fire many people welcomed the opportunity to learn Her story.  A firekeeper named Judy examined Grandmother World Drum very closely. She noticed all the worn and vulnerable places on Her skin, and held her so tenderly.  She offered Her water and massaged Her with Bear Fat, tending Her as though she was her own Grandmother. The attention Judy gave Grandmother World Drum, made Her spirit shine even more brightly.  More people took notice of her beauty, sparking songs and rhythms that were shared from around the world, carrying the vibration of love; the song of the human heart.

At the Sacred Fire, Grandmother World Drum and I were invited by Bryan and Myrna Loucks of the Anishnabek Nation, to attend the ‘Lodge of Nations’, a beautiful and important Indigenous sacred space and centrepiece to the Indigenous Peoples’ program. In the Lodge many ceremonies, teachings, prophecies, story-telling and sharing of Indigenous traditional knowledge took place.

Bryan and Myrna Loucks were offering a presentation entitled ‘Earth Changes and Prophecy’, in the Lodge of Nations.  Bryan introduced two young women from New Zealand to share their story of running around the world with a torch to help unite people.  The flame of hope travelling around the world to unite people demonstrates the unfolding of the prophecies of a time when humans will come together in one circle, in harmony.

Myrna then introduced a breathing exercise that led into a meditation.

As Myrna’s gentle, calm voice guided us, I heard her voice gradually become my Mother’s.  Tears began to stream down my cheeks, as the spirit of my Mother invited me to let go of suffering I carried in my bones.  As the tears fell, I let go of shame for being a woman, for the actions of my European ancestors that caused suffering to the Indigenous people’s, for the childhood sexual abuse I endured, and becoming pregnant before marriage.  I was releasing shame for myself and my Motherline, the Wound of Separation, through the salty tears that stained my cheeks just like the stretch marks on my belly after giving birth.

Afterwards I was invited to introduce Grandmother World Drum to all who were present in the Lodge of Nations. I introduced Her as a travelling drum, bringing peace and unity to peoples around the world, as another example of prophecies being fulfilled.  As I shared my heart moving experience of the meditation, Bryan and Myrna were being wisked away to catch a train, encouraging me to continue sharing and introducing the drum. I was being invited to stand in my voice and light as I sang the ‘Grandmother Cedar Song’.  In this circle, Grandmother World Drum activated my light potential, my gifts and my true voice, reminding me of the most powerful sound – the voice of my own heart.  As I sang the Cedar Song and played Grandmother World Drum, the power of vibration uplifted me, giving rise to my light as I embodied a deeper commitment of healing the wound of separation.

The Song of Creation is the ancient universal language of the heart, activating our heart strings with vibrations of love, remembrance, connection, and hope. It is in the Song of Creation where we come home, meeting heart to heart, with our true selves, our ancestors, and our light potential.

The following is a heart moving experience Grandmother World Drum invited me to do.

What would it be like to lay down and surrender into a place of deep listening and stillness, gently playing your drum over your own heart?

Imagine the vibration of the drum clearing the way for fresh beginnings and dreams in the new year, strengthening the light and innocence of your heart.

As the vibrations of the drum move through you, what would it be like to voice your heart song?

If you do not have a drum, you may utilize your own hand to gently pulse a rhythmic heartbeat over your heart center.

LISTEN TO THE HEART SONG OF THE WORLD DRUM