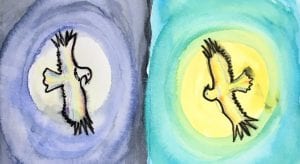 Along a northern boreal coastline dotted with black spruce and yellow cedar, Killer Whale notices Black Raven walking along the shore. Black Raven’s eyes burn red with fire as she paces up and down the shoreline, leaving her scattered tracks in the sand. Searching, Black Raven seems lost, fearful, vengeful and angry. She has forgotten her gifts, power and purpose, seeing only through her fiery red eyes.

Her feathers, normally shining with the reflective sheen of rainbow colours, have become dull and heavy, unable to support Raven in flight. Black Raven cannot recall the scent of the Wild Black Spruce Forest; the scent of home, nor her role in holding the balance of light and dark during daylight, empowered by the sun.

Black Raven’s sister, White Raven, guardian, steward and queen of the night, circles while holding the balance of the light and dark, empowered by the rhythms and phases of the moon. With pink eyes and iridescent feathers that glow in the dark, White Raven flies with wings of pure white. She can be seen in the deepest darkest of nights, as though she were a lamp-post.

Killer Whale became very concerned that Black Raven had forgotten her gifts and sacred role. Without Black Raven fulfilling her role, all of creation could tip out of balance! This was a grave concern, so Killer Whale dove deep into the Water’s of life searching for something that could help awaken and restore Black Raven to her purpose and full potential.

Meanwhile, White Raven became overwhelmed trying to hold the balance of light and dark in the night, without her sister fulfilling her role during the day. When she could no longer hold the balance, she called to Grandmother Moon for assistance.

As Black Raven aimlessly walked along the shoreline at night, Grandmother Moon called to her, singing the most hauntingly beautiful song she had ever heard. As Black Raven’s ears perked, she searched for the source of the song that stirred her soul, looking up into the light of the moon beaming brightly into her eyes. The song and the light of the moon sparked something inside of her, opening a passageway to her heart. Tears began to well in her eyes, as she received the love and compassion of Grandmother Moon. Anger and fear melted with the flowing tears, as her eyes turned clear and black as coals, mirroring the light of the full moon. As each teardrop fell like a crystal rainbow into the water, a rainbow river was created.

All of the water animals could not help but notice the beautiful flowing rainbow river. Killer Whale followed the river deep down, discovering jewels, necklaces and pearls that Black Raven had discarded and forgotten, bringing them back to the shore.

A white pearl necklace stood out among the others and was placed around Black Raven’s neck. The fire that had been in her eyes flowed through the illuminated passageway created by Grandmother Moon’s song, warming her heart. The warmth of the fire awakened her, as she remembered her light, beauty and the immense love within her. She returned home to her heart.

As the sun rose she noticed the colour of the rainbow light being reflected in her wings. As night fell White Raven flew with Her outstretched wings illuminated by the light of the full moon. She too carried a necklace around her neck; a black pearl necklace. Both Raven’s returned to their sacred roles, flying with rainbow wings and pearls of wisdom, reflecting their true gifts and power.

Seeing beauty and light through the eyes of the heart, we come home, remembering who we are, our purpose, power and gifts. Our greatest gifts and light comes from deep within.

In preparation for this home practice, gather some drawing, painting or collage making materials and have them nearby.

During winter in the northern hemisphere, we may find our bodies contracting from the cold, as we draw inward.

What would it be like to allow ourselves to feel the cold, softening in the dark stillness of winter? Imagine our thoughts floating like snowflakes, being carried by the wind into the light of the waning moon.

Like the Raven can we be curious and open to our true nature, and the way light and shadow moves within us?

Does the moon have a soul song that is calling your heart?

What would it be like to allow your heart to creatively express your soul song, allowing it to freely emerge on the page? Does this song have a colour, symbol, vibration or feeling?

Once you feel complete with your creation, with gentleness and compassion peer into the image with eyes of your heart. What does the image reflect to you about your true nature? Write a personal inspiration, a simple sentence in the present tense, reflecting your true nature, purpose, power and gifts.

Just as every snowflake is uniquely beautiful, so are we.