Published By Gwenith K on January 16th, 2020 in Circle Stories From The Heart 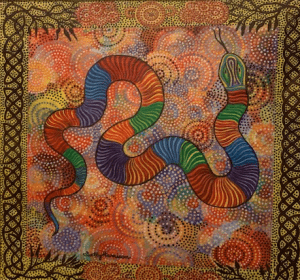 Recently I have been recalling my trip to Uluru (Ayers Rock), a massive sandstone monolith in the heart of Australia that takes many hours to walk around while carrying 4 litres of water.   The whole area is sacred to indigenous Australians.  Throughout Uluru-Kata Tjuta National Park, a Cosmic Consciousness Conference has been held since 2012.  During this year’s conference there was a rare Saturn Pluto conjunction on January 12 where a shift occurred on our Earth allowing perfection to spread throughout our world – a cosmic umbilical cord uniting heaven and earth was created – our true cosmic consciousness.

Many of us are following our circle members, Martha and Todd Lucier and Jan Beaver, who have made the trek to “down under” this month. They have created ceremonies and shared this deeply sacred ritual with all of us.  The Aborigines speak of this great ritual at Uluru which was disrupted and never completed, at the end of the original Creation time. I am sharing a picture of Creator that we found in the Baiame Cave in New South Wales.  We have heard stories of the Rainbow Serpent and know we are being guided to construct a solar umbilical cord from the Earth to the Sun on this conjunction to increase the influence of the higher frequencies of life, as they flow in both directions from Earth to Sun.  It’s an exciting time for all of us.

Many times I have returned to Uluru in Dreamtime and will always feel connected to the rocks, to the people and to the healing energy.   Camping in the outback and connecting with the Spirit of the land with my husband, Ron, and daughter, Amy, was an experience that changed me forever.   Knowing what I know now, I feel my DNA was altered.   The rocks and the people and the air is charged with an energy that I know comes from another dimension.

When we landed in Alice Springs, a city that is close to the outback, Amy introduced me to local people who were sitting outside her school where she taught art. Actually, they were sitting on a dry riverbed and I was invited to sit in silence and listen with them.  We were listening to the water underground and the music it created – the songlines.   Amy did not want to sit so she went off to find a well that someone had told her was interesting to see.  When she finally returned,  she shared that she seemed to have gotten lost and was on the brink of turning back when an Aboriginal man appeared in front of her.  “Hey Mate” he said.  She explained that she was looking for the well.   He just waved good-bye and disappeared.   Amy felt he was protecting her.  He was. Being at one with the land and always of service to all peoples, animals, plants and elements, our ancient ones from Australia listen to all energy.  During their walk abouts,  they talk to the water, the land and all animals above, below and on our Earth – upper, lower and middle Earth.   Sounds shamanic to me!

Their art depicts their dreamland, their maps of the Earth.  Each dot represents an energy they see (not just with their physical eyes).   You rise above and see and feel their art.   The rainbow serpent painting I am sharing was art that was gifted to me during my stay.   Interesting that it now means so much more to me.

Our Circle has been holding sacred space during this great change.   Oh, the changes that have occurred.  We have been witnessing fires, floods, protests and tragedies on our Earth. Through all this cleansing a new truth is being illuminated on our planet.  We are One with Mother Earth. Much is written within our crystal families about the changing time that we are consciously and unconsciously a part of.  We are being taught by the whales, the ancient trees, the stone people, our ancestors, the waters on Earth to remember so that we may be part of this cosmic ascension.   This circle of peace and harmony will aid us in our evolution.

Hearing the harmonics from deep within ourselves passing through the song lines on Earth, has deepened our planet’s chord resonating throughout space. Egypt, Tibet, Japan (two dragons singing), France, Iceland, and Glastonbury’s ancient energy was summoned for this conference. Many of us have travelled to these sacred places and absorbed the energy within us.  This energy was summoned as we are all connected as one.   Yes, we are everywhere on Earth, as our energy travels and creates the crystal songlines.   Our circle brought their energy to this ceremony. I was honoured to be holding sacred space by Mother Atlantic during this time and I know “We are Everywhere”.

During the time of the returning light, please take time to see the sunrise and the sunset. Each time imagine, visualize or pretend your umbilical cord is connecting the sun to you and to the Earth.   Feel the sun enter your solar plexus/nabhi.

Each day listen to the sounds you are making while you hum.  Feel the vibration in your solar plexus. Using all the vowels, chant and vocalize while you are walking, riding in the car or sitting outside with your back to your favourite tree.

Reflect on the times that you have been in different places on our Earth.   Remember how you felt, what you saw and heard.  You may want to document it in your journal.   You may have brought back important pieces that will have an important meaning now.   Also reflecting on  your childhood home and memories may bring new insights to you at this time.

Thank you dear Sandi for sharing this story and holding sacred space for the these times of awakening, connection and healing. With love, Martha