Becoming The Beauty Of All That You Are

Published By Courtney Sinclair on February 6th, 2020 in Circle Stories From The Heart 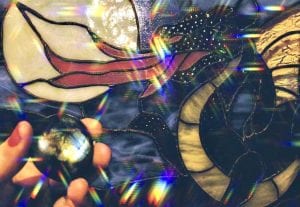 On the verge of a new decade, a message from a wise and ancient dragon came forth in a writing exercise at the Edge as part of the Northern Intentions Retreat with Joshua Lewis and Trevor Corkum.

As I was arriving at the retreat I felt the pull to stop by the Crystal Cave to connect with any gems which could provide me with support or guidance towards the new year. I came across a beautiful smooth piece of Labradorite which felt just right in the palm of my hand and activated a sense of magic within me. It became my trusted sidekick and traveled with me to the Edge.

On the day of New Year’s Eve Trevor lead a guided writing experience that focused around an object we brought to the Edge with us. I chose to explore the guidance within the piece of Labradorite. Through prompts, we sat in observation of the object as if seeing it for the first time and engaged our senses to activate and bring forth the story of the object.

This is the story of Labradorite:

At the beginning of Earth, a large green dragon set out to travel the world, collecting the beauty of nature within itself everywhere it went. Over many years the dragon experienced tremendous evolution and change as it’s dull and leathery skin morphed like a chameleon, picking up the colours and energies surrounding it along the way. As it swam through lakes and rivers it’s hard scales smoothed out and began reflecting a blue tinge in the light. Periods of darkness and storms etched thin black striations into the creature’s large back. As the dragon came across the immense and powerful beauty of rainbows and lightning, the colours and electric energy became forever entwined in it’s being. The dragon continued it’s quest further into the depths of nature and continued to evolve, no longer sure when the forests, shooting stars, and northern lights were those of the natural world or the dragon’s inner landscape. The dragon became enthralled by iridescent waters and drank in the fluid galaxy before coming to rest high in the north; freezing in the wonders, awe, and magic or all it had seen and become.

In deep hibernation, the dragon dreamt of how to share the gifts of the incredible natural world that it had seen, for the dragon knew that the more one experienced beauty in nature, the more they inherently became this beauty themselves. Tears rolled down the dragon’s scaly cheek as it cried with the love that it could pass on this truth. The dragon’s tears, which held the message of beauty at a molecular level, froze alongside the dragon as it rested dormant for thousands of years. Years passed and the tears hardened into smooth looking rocks, a galaxy held within a crystal.

When the ancient dragon awoke from its grand slumber it gathered the iridescent crystals and flew around the world once more, this time with the quest of delivering the crystals to carry forth the truest learning the dragon had ever come to know.

The dragon’s crystal, holding all of the magic of the earth within, shines to reveal this message today – The more one experiences beauty in nature the more they become that beauty themselves. Allow yourself to be transformed by the magic and power of nature into becoming the beauty of all that you are.

What might it be like to open to being transformed by the magic and power of nature?

What does it look, sound, smell, taste, and feel like to become the beauty of all that you are?

What might it be like to no longer be sure where the natural world ended and your inner landscape began?

Bio:
Courtney is an international paddling expedition leader who finds purpose in guiding people through
meaningful personal quests and empowering outdoor experiences.
She loves to reflect and write about the interconnection of nature and the human journey.
Connect with Courtney on social media at @courtoutdoors, and, courtsinclair.com

Beautifully expressed, thank you! Having just driven home from a month in Florida, I feel steeped in Nature’s beautiful elements, inside and out!